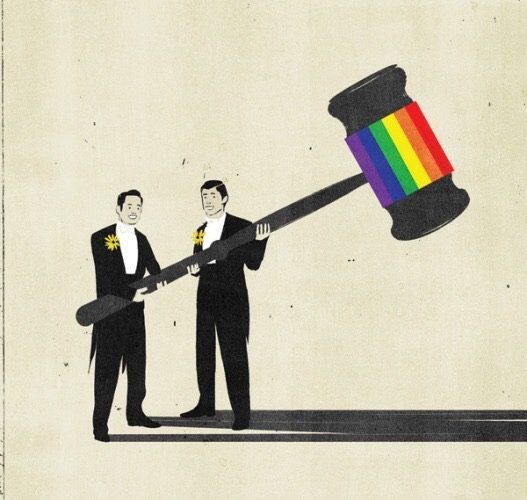 The draft Civil Code defines marriage as a legally registered community between two spouses of different sexes. It also defines that the husband and wife have the right to marry and create a family. Further on, the Draft Civil Code provides the possibility of establishing other civil unions by special law.

Civil society organizations consider that all possible partnerships (marriage or civil unions) should be regulated by the Civil Code. This approach to regulate other forms of partnerships with special law tends to separate the right to partnership for LGBTI individuals from other citizens of Kosovo. Such an approach is a fundamental violation of the human rights of LGBTI individuals in Kosovo, and does not constitute the inclusion of the rights of Kosovo citizens.

The Minister of Justice, Mr. Selim Selimi at the press conference states that they have been able to preserve the “traditional nucleus” of marriage, thus favoring marriage between husband and wife and discriminating against other forms of marriage or civil unions.

Kosovo’s constitution guarantees the right to marry and create a family. The Constitution of Kosovo clearly states that there is no defined sex preventing same-sex couples from marrying and creating a family. Furthermore, the Constitution of Kosovo provides other layers of protection of fundamental human rights. Article 24 of the Constitution – Equality before the law guarantees that every person enjoys the right to legal protection without discrimination, including sexual orientation as a protected basis. The Constitution allows for the direct application of the European Convention for the Protection of Human Rights and Fundamental Freedoms and its Protocols in Kosovo’s domestic legislation, and stipulates that in the event of a conflict of legal provisions, they shall prevail.

Furthermore, in accordance with Article 53 of the Constitution of Kosovo, fundamental human rights must be interpreted in accordance with the case law of the European Court of Human Rights. ( “ECHR”). The European Court of Human Rights has recognized the same-sex community as partners in the Human Rights Convention in articles relating to “Family Life”. The ECtHR has also given a considerable number of judgments regarding the positive obligation of states to legally recognize the partnership of same-sex couples.

The Ministry of Justice has failed to apply the practices of the European Court of Human Rights and has failed to draft legislation that is comprehensive and non-discriminatory on the basis of sexual orientation. It is clear that the Draft Civil Code excludes persons from the right to partnership and the right to start a family on the basis of sexual orientation. As such, it is discriminatory and violates Article 24 of the Constitution, which guarantees equality before the law, and Article 37 of the Constitution, which guarantees the right to marriage and family. Therefore, the Draft Civil Code should be in accordance with Kosovo’s obligations to ensure equal rights for all citizens and ensure the legal recognition of same-sex couples.

Civil society organizations will use all legal means and legal mechanisms to regulate all forms of marriage and civil society without distinction in the Draft Civil Code.