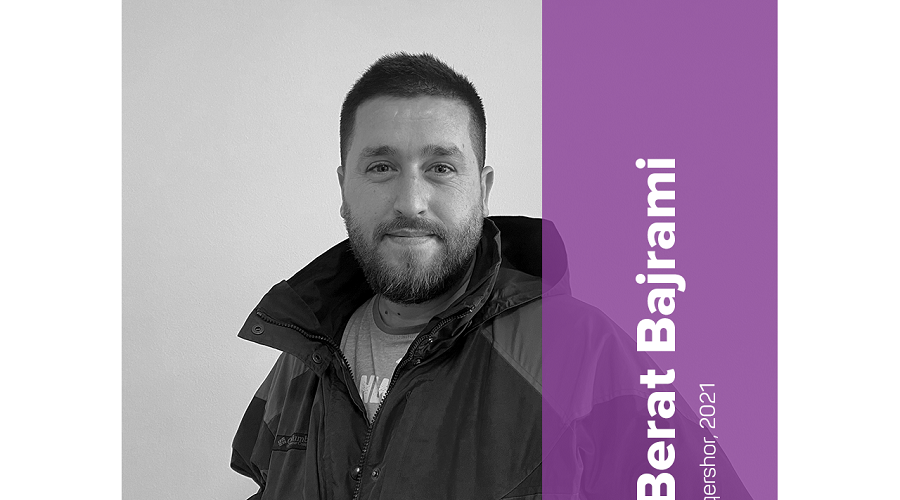 “Totem and Taboo”, a reflection of the Kosovar reality and its contradictions

The curtains were raised. The actors appeared on stage as totems, in costumes both traditional and modern. They do not rush to take the public with them, as if they want to measure its pulse whether it is ready to take the hits from the topics they will discuss.

The names are insignificant in this dance performance. They get lost in the phenomena that the actors skillfully and boldly bring to the stage, like the Totem that is hard to break, and which is fought by voices through taboo topics.

The wait does not last long. Now the stars of the stage are ready to reveal the contradictions of the Kosovar reality, to give a spiritual and emotional shock to the public, as a bombshell for the public responsibility that we have in the theater of life, the voice that should be raised against the oppression and injustice, not just patriarchal.

The public is now informed about the nightlife and drug abuse of young people, whose lives are out of their hands and there is a greater power that has control over them.

The play becomes even more dramatic when the mirrors enter the stage as a reflection of the reality that has struck the characters, who tend to look beyond the mirrors. A beautiful combination of the characters with mirrors that also seizes the audience from the refraction of light.

Monologues and dialogues complete the choreography of “Totem and Taboo”. Through them, the actors now give voice their concerns, to give mixed emotions to the audience. First, through a monologue of the “Peter Pan Syndrome”, a man who finds it difficult to accept the reality of his age, and is not ready to take on the responsibilities that belong to him.

“… Somehow the word ‘man’ requires a lot of responsibility. I never wanted to fulfill all those absurd demands that others have had from me … “, says a 39-year-old who behaves like a teenager, and fails to turn flings with women into relationships despite “the great love for them ”.

“Women are not worthy”, is the comment that changes the scene, and creates a clash between the characters in pairs, who have great differences among them – a scene as comical as it is dramatic with the fighting among the couples.

The appearance of the “speaker” on stage for the daily briefing regarding violence against women shakes the public, and their comfort is disturbed from what their ears hear. From the state of shock the public is now delivered to the harsh reality created by the pandemic. Turning their backs to the public, the actors honor all the victims of the pandemic, but also the martyrs and victims of domestic violence by making an extraordinary interpretation of “What Kosovo’s eyes witnessed”, a silence that grips everyone and they only listen to their heartbeat, to remember those who once lived beside them.

After this scene, is the moment for the living to enjoy life, with actors who under the rhythmic music and mirror dancing revive the atmosphere in the theater. However, the drama is not absent, as here a division is created between men and women, with the latter that do not compromise their freedom. After they leave the triumphant scene, with the men remaining on stage to play one of the parts that requires high physical preparation, to continue again with one of the monologues. A man who wants to become a father at all costs, and at all costs wants to have a son, a manifestation of a typical patriarchal man who is fulfilled only by the distinction of the genital organ of the child.

After this scene, the public is introduced to the duet of love and pain, a combination of trauma, love, memories, assaults, loneliness and longing for loved ones. A scene that ends with finding each other “… your smile warms my wounded heart and allows the pain to be released”.

The mirrors, an element of special importance in this performance, return to the stage again with the characters that bring a positive energy under the sounds of rhythmic music, to continue with a shocking monologue of the reality that women face.

Set in front of a mirror and suffocated by pain, and despite this she manages to walk away, not giving up. “It all started with the feeling of butterflies in your stomach, you know, the one where you think something beautiful is going to happen, but is in fact mixed with something else, like those times when you feel the observation of predators on the street, when the teacher is drooling while you are answering about the French revolution in history class, or when the neighborhood market clerk looks at you smiling with decayed teeth when you ask for a pad even though you are 13 years old…”. This is only a small part of what women face on a daily basis, under the guise of patriarchy; rape, harassment, insult, insecurity, fear and what not.

The woman faces herself, asks questions but without answers, does not even see her reflection in the mirrors, which are turned around. After a long psychological struggle she manages to find herself, sees the reality in the mirrors and tells the truths she did not know. Her voice is calm, and fear is now only an illusion… “How is it possible that all my life I have been surrounded by such symptoms of imprisonment by love and failed to recognize, identify, treat and even remove them?… ”

They are joined on stage by men, in which case a clash begins between them, not only man-woman, but also woman with woman and man with man, a clash that seems to continue forever, and the dialogue culminates with the part of a custom of the men’s chamber, “A man once said…” says one man, but the others throw him a cigarette “… ooo light one …” in order to not let the patriarchy stand out, until he finally surrenders “… Ooo a woman once said …”. 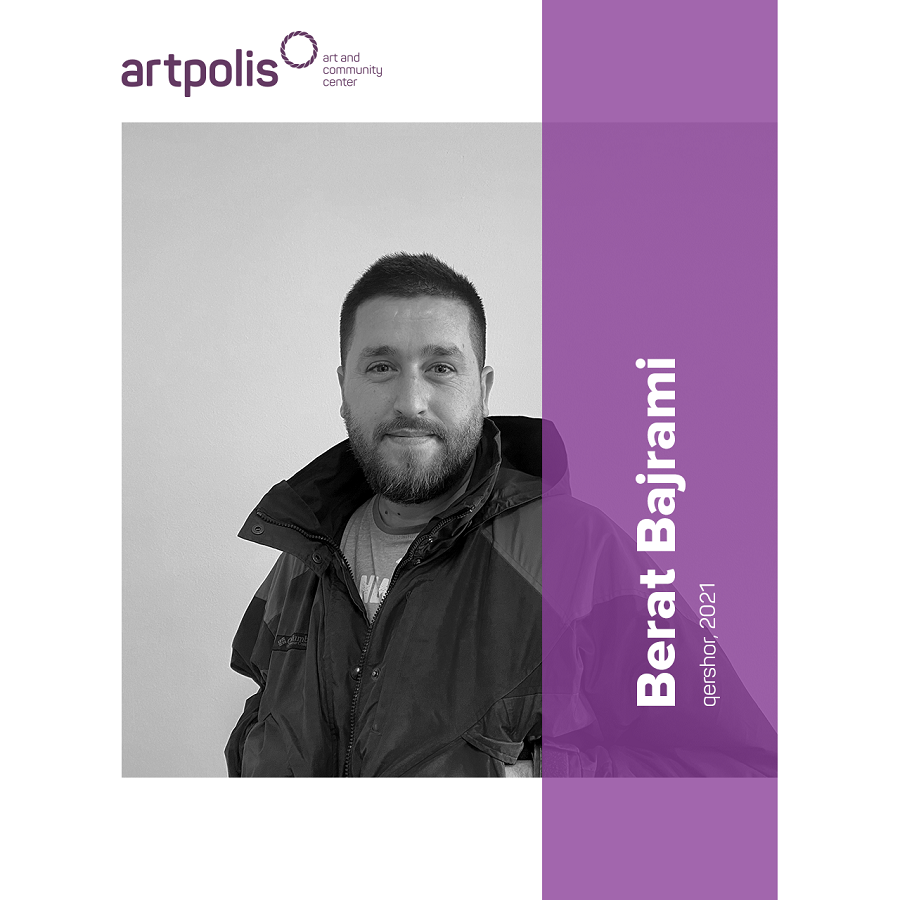 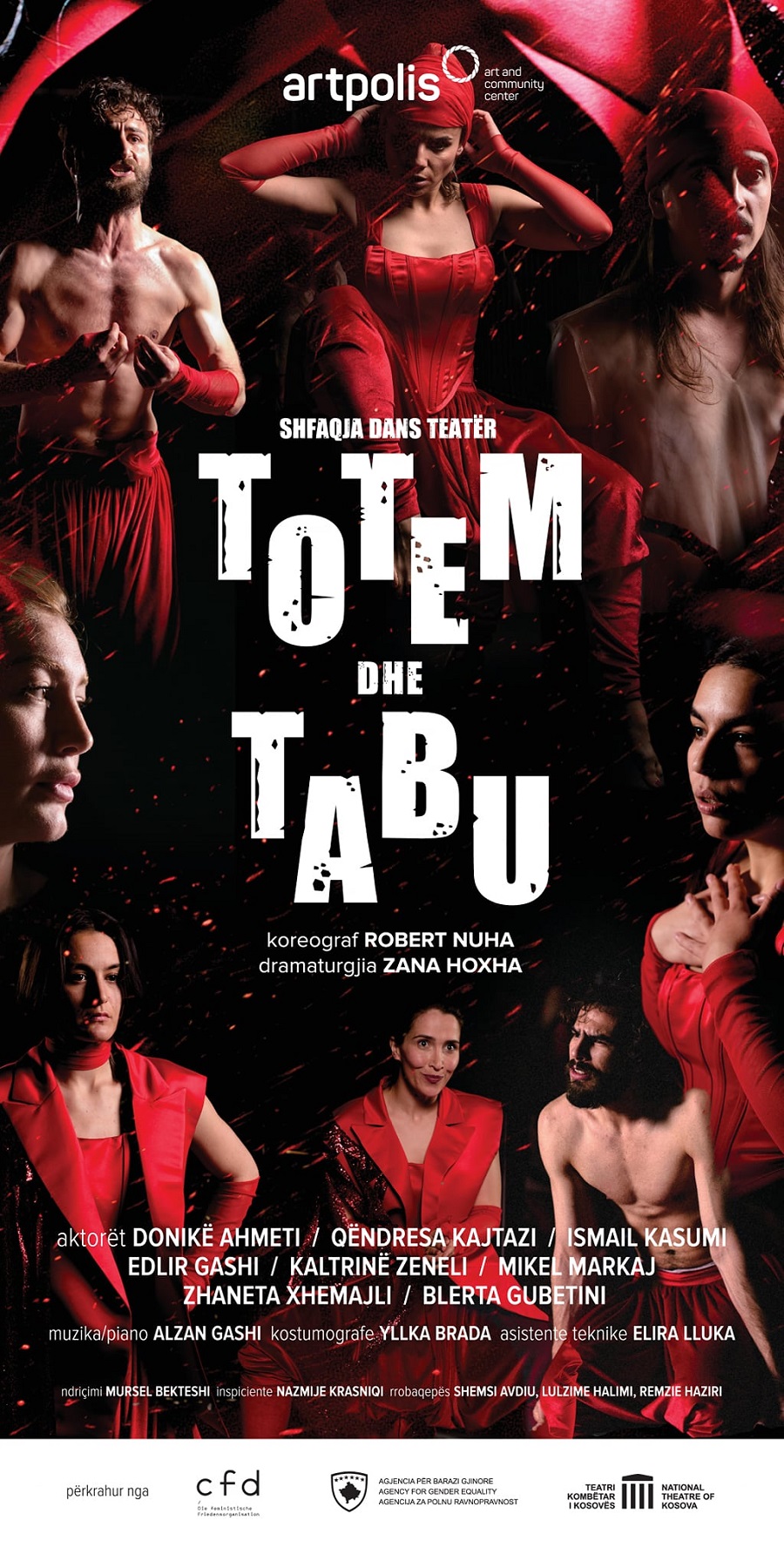 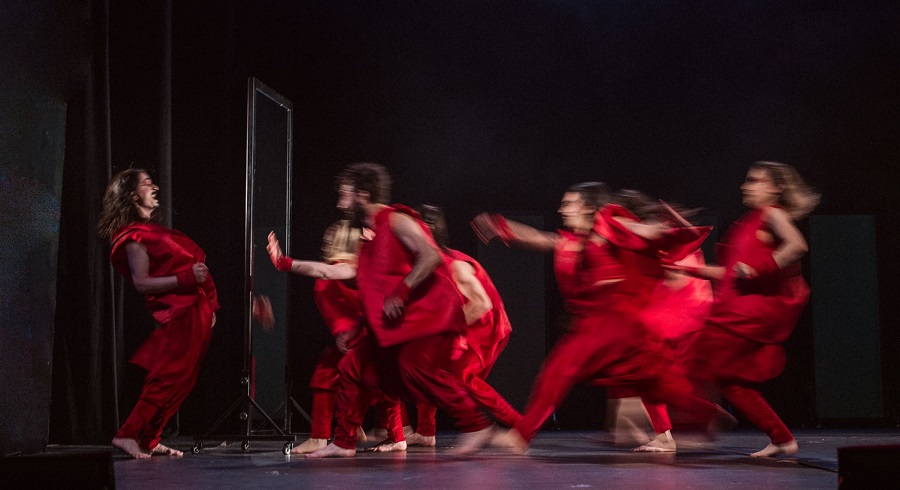