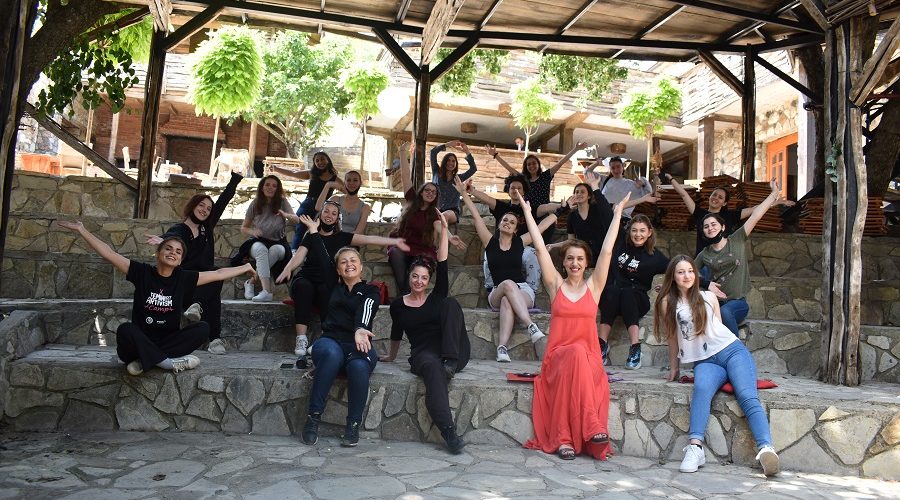 Human beings have continued to create even during unfortunate times and under the strangest of circumstances.  The process of becoming and creating is part of our genesis and essence. With this in mind, Center for Art and Community – Artpolis has organized the feminist camp with artist and activists from all around Kosovo for four days, in Kukaj from 26- 29 June, 2020. Though, it’s just the second time, this camp brought together twenty-five women “ART-VISTS” to create and develop art works that reflect experiences, resistance, challenges, conflicts, cruelty, resilience and devotion in times of the COVID 19 pandemic all around the world,

A powerful series of stories, experiences and feelings have been told for four days in a row. Openness toward each other revealed similarities not missing. They grasped these similarities and approached each other even further, giving the power and inspiration/motives for more. These four days of intense work consisted of group work sessions, including rehearsals for scenic moves, creative writing, meditation and catharsis/ emotional relief. These have assisted artists and activists on expressing deliberately their experience and perception about society.  Other than that, there were discussions going on with the aim to break down and reformulate concepts and ideas related to each of their artistic performance.

Artists and activists, which were divided in four groups established inspiring connections between each other and reunited with common goals and ideas to help one another carry out four artistic performances. This artwork is supposed to address messages on social matters. Every activity happening during these days was in function of developing their shows. They will proceed on betterment until finale which is presentation during 8TH Edition of FEMART Festival, from 15th -20th of October,2020.

Camp of Artists and Activists came into being thanks to facilitators: Zana Hoxha(director), Robert Nuha (choreographer) and Shpetim Selmani (actor, poet).

This event was supported by the Embassy of USA in Prishtine, Kosovo.