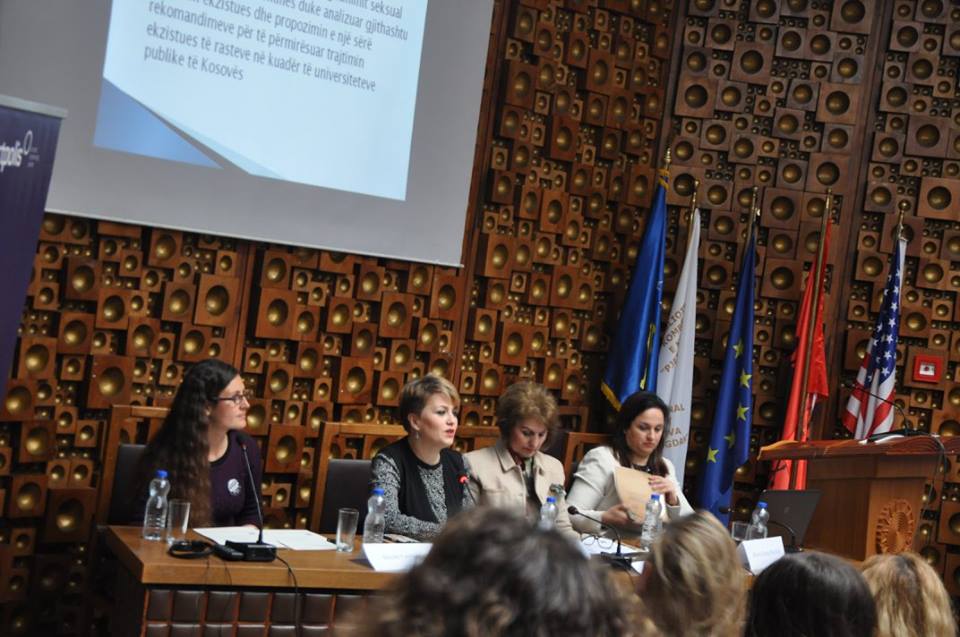 Publication of the Report – “Addressing Sexual Harassment in Public Universities”

Today, at the Amphitheater of the National Library “Pjetër Bogdani”, in honor of the 8th of March, the Center for Art and Community – Artpolis published the report “Addressing Sexual Harassment within Public Universities”

This report was prepared by Msc. Ariana Qosaj – Mustafa with the contribution of Jetbardha Selmani and Jeta Berisha, who addresses the current situation regarding sexual harassment within public universities.

Attending the launch of this project and sharing a speech welcoming the report and calling it as much needed to postpone university education in Kosovo were: Deputy Head of Mission of the United States in the Republic of Kosovo – Colleen Hyland, Pristina University Vice-rector -Myrvete Badivuku and Program Manager at the Women’s Network of Kosovo – Nicole Fransworth.

“The American Embassy in Pristina will support this project will try to create alternatives and lobby for an equal society,” said Mrs. Hyland.

Meanwhile, the Vice-rector at the Public University of Pristina promised to engage very quickly and to include as core topic at the Senate roundtables the issue of sexual harassment in public universities, hoping in the near future to achieve a policy to stop sexual harassment.

Also, Mrs. Fransworth strengthened the position of creating as soon as possible defense mechanisms and immunities in the university system for such an act to be punished by law.

At the same time, the executive director of the Artpolis organization – Zana Hoxha – Krasniqi praised:

“This report is not just a project that starts and ends on a given date or a donation but is a long-term investment and we will do our utmost to push it forward as a policy.”

The presentation of the report sparked a positive discussion, and all participants agreed that co-operation between Kosovo’s report representatives and public universities should be implemented as soon as possible by the Kosovo Government.