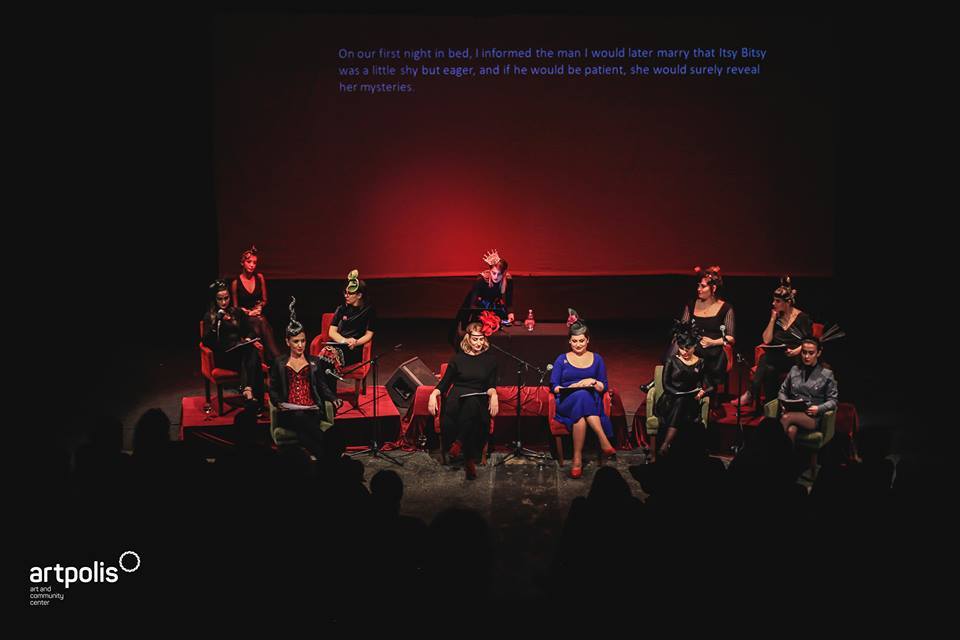 The scenic reading of “Vagina Monologues” strongly captured the space of ‘Oda’ Theatre to talk about one of the greatest ‘mysteries’ of life: the vagina. If your vagina could talk, what would it say? “Vagina Monologues” poses this question and many others…

Originally written by Eve Ensler in 1996, in the midst of the third wave of feminism in the United States, “Vagina Monologues” took real life experiences and transformed them into an epic play full of mastery. Since its inception, “Vagina Monologues” has been performed in many countries of the world. With topics that deal with sexuality, sexual relations, love and abuse, the reading is just as painful as it is powerful.

Not only does the reading help to promote the conversation about femininity, but it also tries to raise awareness about sexual and domestic abuse, that are unfortunately common experiences for women.

The director of the performance, Zana Hoxha Krasniqi, also executive director of the Center for Art and Community – Artpolis, said that it was the ideal time to execute it considering that it’s the 20 year anniversary of the publication. She then stated that through her vision, she directed the reading to communicate with today’s women and to inspire young women to love their body. As for boys and men, the main idea was to encourage them to be more respectful of the needs and individuality of their partners.

“One of the main things I wanted to emphasize is that women do not belong to their husbands. Women should be treated as equals in every sphere of life, including sexual relations,” said Hoxha-Krasniqi.

As far as Artpolis is concerned, this is not the only project of this organization that addresses these issues. Since 2015, Artpolis addresses not only sexual harassment, but also stigma, gender-based violence and various issues of concern that affect women’s lives every day in Kosovo and in the region.

“Vagina Monologues” is an important feminist reading that emphasizes the difficulties women endure each day. It also highlights the different dimensions of the common mentality that need be changed.

The scenic reading consisted of multiple sketches, each one handling specific topics. The first reading from the monologues titled “Hair” was devoted to the aesthetic grooming of the vagina, criticizing the stigma that follows pubic hair. It also noted that the aesthetic maintenance of the vagina is so emphasized in the patriarchy that the actress, with a cynical smile states that “…when we went to marital therapy, he [her husband] said he screwed around because I wouldn’t please him sexually. I wouldn’t shave my vagina.”

Meanwhile in the monologue “The Flood,” where it is understood that the role is a woman from an older generation says: “[My vagina] it stopped being a thing that talked a long time ago. It’s a place. A place you don’t go.” If the viewer considers that this woman’s vagina refers to her sexuality, then the mentality of the generation of this woman can be understood as well. They were ashamed of anything that had to do with their vagina. A bigger concern however is that parts of this mindset are still prevalent even now. Women have nevertheless made great strides, especially in the last 18 years in terms of breaking the ice on conversations that were considered taboo; but it is clear that more needs to be done when the word “vagina”, which is realistically speaking, a clinical term, is still considered embarrassing.

Subsequently, the show expanded more to sexuality and sexual pleasures, although not avoiding the darkest corners of a woman’s experience, as rape is. The monologues “I was there in the Room” and “The Little Coochie Snorcher That Could” filled the room with pain and anxiety, accurately mirroring deep feelings which we often refuse to face.

The last monologue, “My Angry Vagina” was performed in a particularly powerful way. This part was a call for action, bringing together the various topics mentioned during the show and emphasizing the importance of love as a tool for human relationships.

“Vagina Monologues” could be the only production that encourages you to shout “pussy” with all the power your lungs hold, but it is also one of the few shows that contribute to the way the feminine body is seen. With intimate stories and an intense script, “Vagina Monologues” will leave you informed, satisfied and above all empowered. The emphasis of “Vagina Monologues” is the focus on each woman in the performance and how their stories pan out in the bigger context of society, never seen as detached from society.